An Intelligent Transport interview with Henrik Palmér, Head of Sales at Region Stockholm/SL, discussing the main drivers behind Stockholm's decision to overhaul its ticketing system, detailing the processes and challenges involved with implementation, with advice to other PTAs contemplating modernisation.

Why did you make the decision to modernise Stockholm's transport ticketing now? What drove that decision?

There was a real need to modernise for the customer. Mobile ticketing has seen quick growth in Sweden and other Nordic countries so we needed to be able to provide it to our customers. In Stockholm, there are gates at the metro and validation on buses, so we have to ensure there is a suitable validation unit in place both on the buses and at the gates. Without these, we wouldn't be able to increase the number of mobile tickets.

There was also an internal need for us to modernise. The ability to validate mobile tickets was part of this too, but we also needed to be able to better Secure revenue. We found that our existing approach to mobile ticketing allowed people to cheat the system, for example, copying tickets and sharing them on social media. We estimated that we lost millions of euros each year because of this.

The old card-based system has started to show its age as well. It's getting more difficult and more expensive to maintain.

Our contract with our current system provider is due for expiry in 2023, but due to the time it takes to completely overhaul a ticketing system, this was the right time for us start working on finding a new partner.

Did you know what kind of solution you wanted to implement before you chose a vendor? What was that process like?

I would say that we started this process a long time before we even realised we'd started it! There was a transformation phase where we tried to provide more and more services to the customers, and as a result forced the old software platform to cope with them when it isn't designed to do so. For example, the e-commerce part of our current system doesn't work that well because it's an old-fashioned ticketing system. We tried to develop it and force it to do new things, but ultimately it didn't work as well as we wanted and we realised we needed to try something new.

Our organisation is going through a period of digitalisation, as is the case with many operators and authorities. We have started different internal processes looking at how to develop software or procure software. We've changed from solely procuring software to developing our own for some core business systems. Based on that, we started to investigate what we needed for the future. Revenue protection is crucial for us – our strategy is to make all customers always show their ticket when boarding transport and we wanted to keep that in place. We needed a reader capable of reading all future tickets, whether mobile, smartcard or otherwise – we are introducing contactless payments in 2020. To the largest extent possible, we wanted to futureproof the new system.

The hardware is key to a successful transition. Once you commit to new hardware, it won't change for a long time, so it's vital to find the right vendor whose hardware can meet your requirements. We investigated the market knowing that we wanted off-the-shelf hardware, but also knowing that we didn't want to buy a full system solution as we had in the past because they generally lack flexibility. We knew largely what we wanted, and after a public tender process, we partnered with Access-IS.

How has the modernisation process gone so far?

The thing to remember is that you really don't change ticketing systems very often and it means that, quite frankly, organisations like ours don't quite know how to. Since the last time the entire system was upgraded in 2003-2008, technology has moved on a lot and the expertise that were relevant then are less so now, If you have the ambition to change system, you need to change the way you work and the way you tender – you have to re-evaluate everything. Organisations need to adapt to be able to fulfil this type of task – there are so many processes and parts of the workflow that aren't optimised for change and will need to be rebuilt from the ground up.

Outside of revenue protection, which you've already mentioned, what are your hopes for this modernisation project?

We're aiming to better control the development of the ticketing system this time. We also want to decrease and optimise our costs. Our existing channels will be easier and cheaper to maintain. We will also be less dependent on third parties, which will help us to be more effective and make operations cheaper.

The biggest thing is to increase ridership and we see contactless payments as being a real breakthrough and enabler in this effort. In the Stockholm area we have just one fare zone, so passengers pay the same price regardless of the distance they're travelling. It makes the short trips feel a little more expensive, but longer trips excellent value. The simplicity also lends itself to better adoption of public transport by users; being able to tap in using a contactless card but not having to worry about the price would be excellent for our passengers.

More mobile tickets will make it easier and more accessible for people to purchase tickets and travel. The market penetration of smartphones and digital payments in Sweden has always been extremely high so it is a great opportunity to roll out more mobile ticketing. This is also crucial because passengers haven't been able to buy physical tickets on buses for the last 10 years.

What has been the biggest challenge in this process so far? How was it overcome?

Internally, the challenge is to make our own organisation understand that we are beyond the point of maintaining the old system and into a phase where we're looking at total change. We're tackling new processes and challenging timelines to be able to deliver the new system on time. I'd say we are on track now, but it has taken time.

Another internal challenge that other PTAs are aware of is that when changing ticketing system, it cannot be done completely separately from the existing system because you can't just close all the gates and stop taking payments. Effectively, it results in providing two systems that run in parallel with one another until such a time as you're absolutely ready to fully launch the new system. Interoperability between modern and legacy systems is a huge challenge.

We chose Access-IS for our multi-readers for buses and gates – their equipment is running side-by-side with existing hardware, systems and networks. It's a real challenge for everyone involved to get that working, but it's one we've overcome together. We've seen Access-IS really grow into the role where they've had to provide hardware directly to us as a PTA, rather than to a software company – they have made tremendous progress on this project.

The implementation is ongoing, but we're now looking at full implementation – about 3,000 readers – by Summer 2019. Our testing has gone well and it has been implemented on 700 buses and in 400 gates already.

What advice would you give to other PTAs looking to modernise their ticketing offering?

It will always depend on what their specific needs are, but generally, I would say that you need to have a clear goal in mind for what you want the system to be like and what you want it to do. Decide what kind of control you want over the service you're going to provide; do you want purely off-the-shelf solutions, or are you open to building parts of the system yourself? There are unlikely to be clear lines here, so you must be open minded.

Once the hardware is fitted, the goal should be to keep it for around a decade – you need hardware that is futureproofed to some degree. Software is easier to adopt, but again, you need a plan from the start.

Always have an end goal in mind – something to aim at. It might be unlikely that you end up with exactly what you set out for, but having a goal to aim at will ensure you make it at least most of the way. 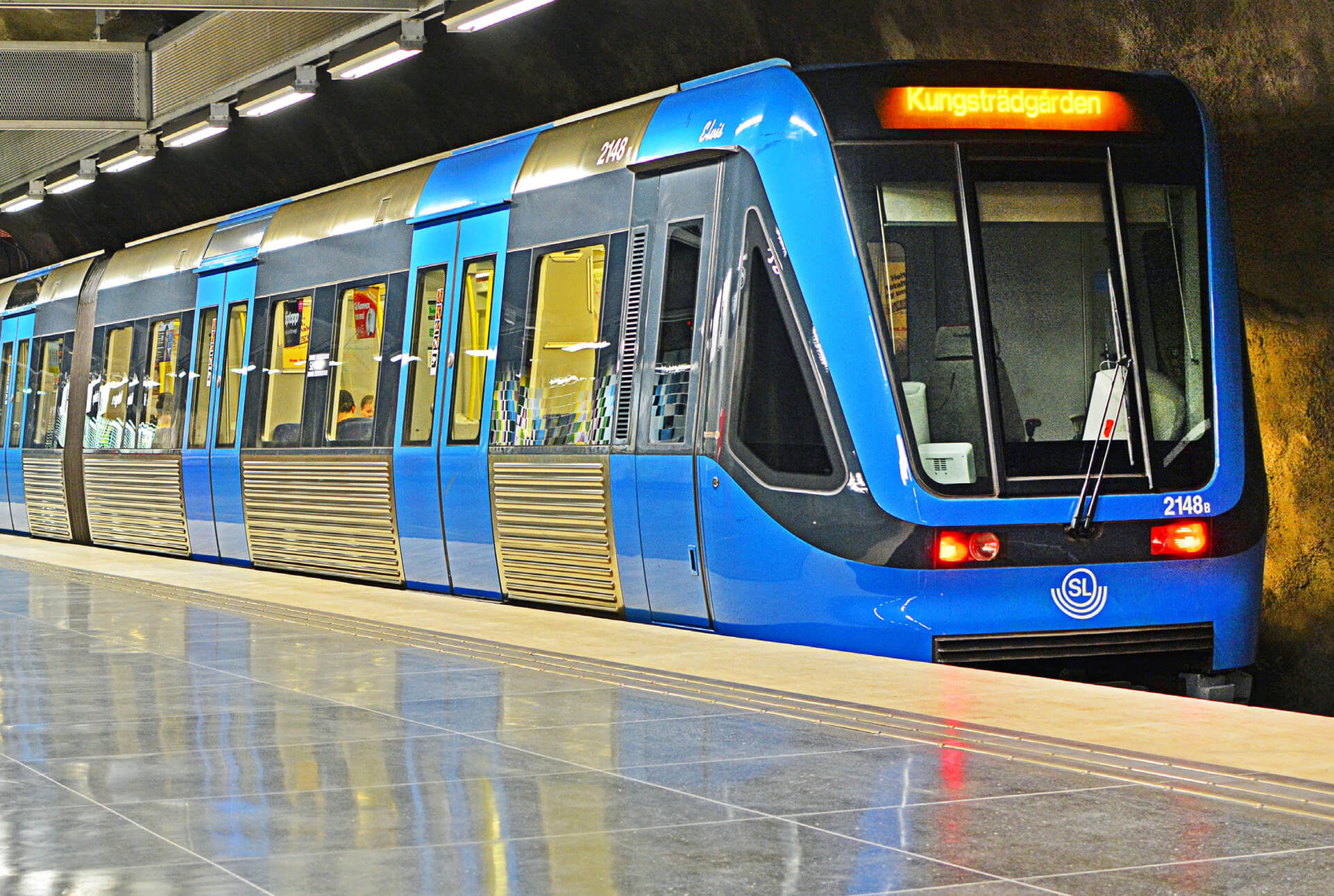 THE VIEW FROM THE VENDOR

WITH OVER 20 years of experience in the air transport market and a rich history as a pioneer in the manufacture of boarding gate ticket readers and passport scanners, this has been our most significant project in public transport to date.

With the help of a transit authority whose vision of the future is not limited to what is possible today, we have been able to grow our knowledge and experience to help Region Stockholm/SL deliver a landmark project worthy of being a model for cities around the world.

Our focus on the benefit to users of having a ‘single point of presentation’ for any ticket has been built on a belief that the passenger is key; if you make their journey simple, easy and pleasurable then everyone wins.

We have worked hard to take multiple technologies – including 1D and 2D barcodes, RFID/NFC, and closed-loop and EMV open-loop payment schemes – and bring them together into a single passenger touch point that is as simple to understand and interact with as a Lego brick.

The resulting line of products, named TripTick, offers these benefits and will be a cornerstone to many new ticketing solutions, including the on-board validator VAL100 and metro gates as in Stockholm, as well as a new platform validator design in the future.
As with any project of this size and complexity, there has been a learning curve from both sides and it has resulted in tangible improvements to our product lines and our ability to understand and deliver large and complex projects that truly benefit transit operators around the world.

Back to all case studies

Contact us to find out more about our products, services and what we can offer your company.